Why Trump must win: Freedom on the line 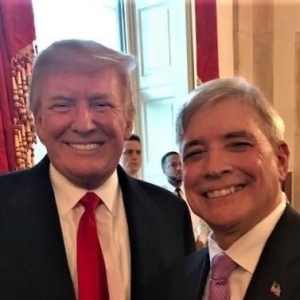 Lt. Steven Rogers served in the United States Air Force from 1970-1974. After receiving an honorable discharge in 1974, he became a police officer in the city of East Orange, New Jersey. In 1976, he left the East Orange Police Department and became a police officer in the Township of Nutley, N.J. until he retired in 2011 as a Detective Lieutenant, Commander of the police department’s criminal investigative division.

In 1986, Mr. Rogers enlisted in the United States Navy Reserves and served with the Office of Naval Intelligence until he retired as a Lieutenant Commander in 2004. In 2001, he served as the Deputy Director Intelligence Support Group, Homeland Security. In 2002, he served as Deputy Chief of Staff, (N2) Intelligence, assigned as the U.S. Northern Command’s Senior Military Intelligence Officer to the FBI National Joint Terrorism Task Force, Washington, D.C.

Mr. Rogers has a degree in Criminal Justice Administration from William Paterson University, Wayne, N.J. He also completed courses of study in military strategy at the United States Naval War College, Rhode Island; and the Global Terrorism, United Nations, New York City.
Mr. Rogers is an author of several books and is a frequent guest commenter on FOX News, NewsMax and other national media outlets.
He is President of Rogers for America and is presently serving on the
Advisory Board of President Donald J. Trump for President. Mr. Rogers is married and has 3 grown children.